The Most Important Moments in Women's Football History

By The Football History Boys - February 03, 2019
In November 2018, Gareth and myself set ourselves the task of compiling a list of the 50 most important moments in football history. After a week of whittling down over 100 suggestions we finalised our list. One of the moments inside the final 50 was the impact of women's football on society during the First World War. Originally, we were going to include more moments from the female game - but through our studies of the football, we've learned that women's football has its own unique and intriguing history. 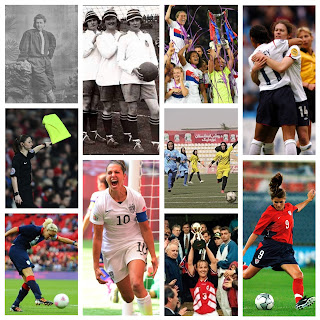 Knowing this, it only seemed right to celebrate women's football properly. Currently, the game is more popular than it has ever been. Of course, much needs to be done to see equal opportunities for girls and women across the world, but in learning from the struggles and innovation of the past - maybe we can see a more inclusive future.

For us, here at The Football History Boys, we would be the first to admit that prior to us setting up the blog 6 years ago - we knew precious little about women's football. We had attended matches in the past - most noticeably the memorable Olympic opener - GB vs New Zealand in Cardiff, but had little understanding of the incredible history the women's game has. What changed it for us was writing a blog about the England Women's Team.

Following the publication of this blog, we received an email from John Blake Publishers, asking us to review a new book written by Tim Tate. 'Girls With Balls' told us the 'secret history' of the women's game and opened our eyes to the story of the Dick, Kerr's Ladies during, and in the immediate aftermath of the First World War. From reading further works by Jean Williams and other prominent historians, we gradually developed a real passion for the history of women's football. 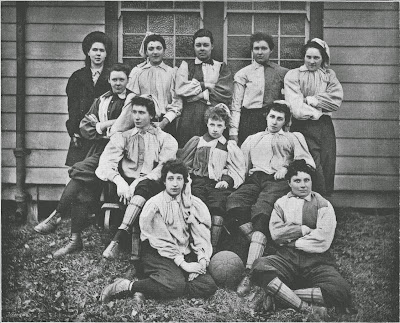 Writing further, we discovered the social influence of pioneers like 'Nettie Honeyball', 'Lily Parr' and 'Emma Clarke' and the themes of gender, identity and class became increasingly apparent. We've since written numerous blogs on women's football, both old and recent and used social media to help us continue building a network of female bloggers and women's football fans.

These are just five accounts you should follow - and each has helped to develop and alter modern day opinions into favourable ones. Finally, for us - the @FB_Collective conference in Glasgow (2018) featured a female panel made up of and ex-pro (and PhD candidate) @AlexCulvin, ex-pro @LucyJWard, current pro @Ky_Sjoman and sociologist @StaceyPope20 - really highlighted what needs to be done in order for the women's to get the recognition and respect it deserves. 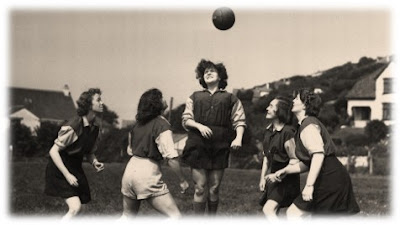 Our journey into the past will start with the game's origins - following the codification of football in 1863, women's football would begin to develop towards the end of the century. With sides like the British Ladies Football Team, original matches were seen merely as a novelty for men to enjoy - but soon it would become clear that those playing did indeed show a knack for the game. Other sports would see some female engagement - most noticeably in lawn tennis where women's tournaments and even mixed-gender pursuits were played, often in front of large attendances.

As the decades past, the men's game would grow into the national sport and it was only until its suspension as a result of the World War One, that a chance for women was offered. Around the same time, the Suffragettes were pioneering for universal suffrage and sport would become a way to highlight and showcase just how capable women were - even in the face of mass misogyny. The First World War would see large numbers of women and girls put to work in munition factories. The 'Munitionettes' would use football as a way of recreation and  feminine expression. The development of local sides saw large numbers of spectators attend matches - offering a chance to raise domestic morale as well as filling the void left by the men's game.

After the war, the women's game became a mass spectator sport with over 50,000 attending a match a Goodison Park in 1920. Fearing for the popularity of the men's game - a draconian ban was put in place - halting the gathering momentum of women's football in 1921. No longer were the sides, which had done so much during and after the war, allowed to play on FA affiliated grounds. Still the game would continue at some level and begin to develop abroad.

By the 1970s, the ban would be lifted and the WFA formed - despite two decades of relatively slow growth in the UK, the game around the world had evolved significantly, leading to the 1991 FIFA Women's World Cup. In the subsequent years, genuine superstars would emerge - none more so than US striker, Mia Hamm. Hamm's pioneering of the game in US opened it up to a much larger audiences and gradually in Britain, the FA would take a more active role in female engagement. 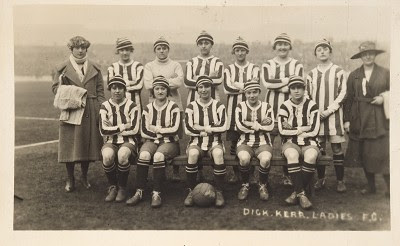 This moves us on to recent history and the rapid spike in popularity of women's football. New moments that will live long in the memory are being played out each week in newly formed professional leagues and questions are finally being asked about how the game can become more inclusive.

This is why we are writing about the most important moments in women's football history - please enjoy what is to come in the next few weeks!

Follow @TFHBs on Twitter in order to keep up to date with our countdown of the 'Most Important Moments in Women's Football History'!

If you missed out then catch the previous articles here: