Football and Education: A Game for Girls?

By The Football History Boys - November 21, 2018
Recently, we have been writing all about the effect football has had on education. We have looked closely at the development of the game and its influence on schoolboys across the country from 1829 to the present day. What was not so prevalent in these pieces was the impact it has had on girls. The main reason for this was because we did not want the history of football and girls' education to be quickly put into a single paragraph, and rather we thought a whole article should be devoted to it. In other TFHB posts we have seen how the history of women's football is far more detailed and intriguing than we first believed - and this is no different.

To recap, the history of football and education has followed a remarkably similar timeline. The growth of 'professional football' and its influence on the working-classes of the UK sees comparisons with the push towards mandatory state education. Football had previously been codified by the public school system, but taken to its heart by the common man and perhaps more importantly, the aspiring middle-classes.

Its influence on children was clear to see from the numbers of youths in attendance at league and cup games. Incredibly, some school timetables were being restructured to suit local cup matches in Nottingham and Stoke. During the war, many women and young girls had played the game in order to help domestic morale. Crowds of up to 50,000 watched and were taken in by the skill of those playing. Apprehensive about a lack of specatorship in the men's game, the FA acted to ban women's football in 'male' stadiums.

Following the First World War, the focus of our work shifted towards the effects education and football had to deal with in a turbulent and fractured world. The education system in Britain would take on some changes around this time. Most notably due to the resultant ‘war generation’ of children. Social change was to be seen with the suffrage of women over the age of 30 and attitudes towards women would slowly change.

This was noticeably the case following the success of the Dick, Kerr Ladies football team. Their influence on women is staggering. In fact, by 1921 we can see articles appearing to suggest the formation of girls’ teams in elementary schools. The Hartlepool Daily Mail makes note of the side and references its match against the school’s male equivalent. The result – a 2-2 draw was a sure sign than girls’ football had undergone a massive transformation.[1] So huge in fact, that the FA’s decision to ban women from FA affiliated grounds becomes even more desperate. Girls were being actively discouraged from participation. Nevertheless, in other “more feminine” sports, the interwar period can be seen as generally radical for women's sport in Britain - an increase in participation and a more specific scheme of work in schools meant it was beginning to become more accessible.[2] Ultimately, in working-class schools, football had been left behind in this broadening of female sport. 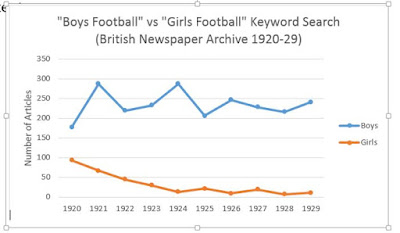 What this graph shows is the decline in girls’ participation in football. A simple keyword search into the era reflects the attitudes towards female football. Although, socially speaking, female rights progressed during this era – this was not reflected in the inclusion of girls in football. In 1920 – there is less than 100 articles difference, but a decade later over 200 articles more are dedicated to the writing of boys’ football. What this does show however, is that boys’ football was remaining a consistent feature of British society. By the 1930s, it would continue to grow and the success of school’s teams is well documented in the archives. The Hull Daily Mail makes note of a side’s victories in June 1931 – writing that they should be taken in by local professional clubs.[3]

By 1939, and the start of World War II, children were evacuated from the cities into the countryside. Football was, for many, a common passion amidst widespread fear and chaos. Leagues and tournaments were set up to cater for evacuees and 'make them feel at home'. 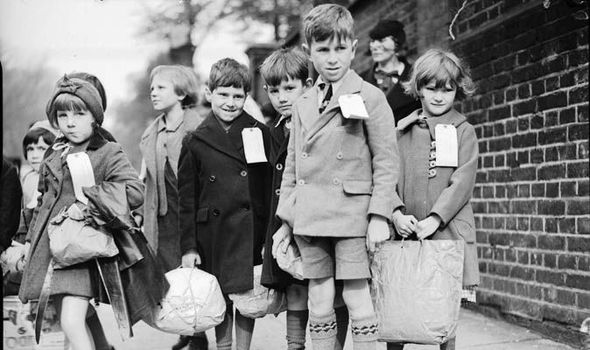 War had a lasting impact on the nation. The Labour government aspired to help the common man and woman and founded the Welfare State. With it, brought a new age in Britain. Soon consumerism and social revolution meant attitudes had shifted towards more open-minded beliefs. This would have a tremendous effect on women.

For young women, the formation of the WFA in 1969 was a start in a shifting public attitude. Two years later the ban was lifted and a women's cup final took place. In schools however, a lack of football would be the source of frustration for many. Historically, speaking, it is difficult to find many articles concerning girls’ football at school level. However, this is not to say it is totally a redundant area of football and education.

The writing around the subject is fairly sporadic until the aforementioned, lifting of the ban, but after 1971 the slow growth in articles at least shows some positive impact the sport has had on young women. The Coventry Evening Telegraph notes that upon watching a girls’ game in 1971, “some of the tackling would have made some of the men wince”.[1] Furthermore, articles can be found during the 'golden era' of women's football between 1917-1921. Clearly the success of the Dick, Kerr's Ladies had left a lasting impression of young girls across the country - even leading the UK's first elementary girls team...

Women’s football in schools retains a similar narrative to women’s history in general. It is one of struggle and of subjugation to the will of others. Jean Williams is quick to realise this as she writes that girls’ football was as less in evidence then as it is now.[2] Perhaps a hyperbole with regards to modern inclusion, but it shows the century-long frustration towards female involvement in football. Through her extensive research, Williams does recognise that girls still played football in schools as early as the 1890s, albeit far less frequently than their male counterparts. The ESFA, as previously mentioned in a previous post, was essential to boys’ football in Britain, but Williams is quick to argue that only after the 1975 Sex Discrimination Act and 16 more years of confusion, did girls’ football finally get some recognition. It is only really after 1991 that newspaper article surrounding girls’ football increase.

Unfortunately, even in schools today it is rare to see girls playing football during lessons, having to wait until after school instead. It is no doubt something which the present Football Associations of Britain will look to change. A government report from 2006 on Women's football discusses in detail the frustrations of girls since the 1960s. Early on, it is quick to recognise the lack of a “clear pathway for girls to play football through primary school…and beyond.”[3]

The report continues to note the power of the teacher on integrating a girls’ team. If there is no interested teacher, there is only a slim chance of the local primary school acting as a hub for female football. It is vital then, that more support is offered to primary schools and indeed their staff in order to help fund female football programmes. Recently, in the news we have seen the struggle which some girls still have to deal with in order to play the game they love. The story of 7 year old Darcy Yarnold showed that she had been picked on for playing football with boys. Fortunately, the women's FA and leading figures from both the men's and women's game have been quick to recognise this and draw it to our attention. She led the Lionesses out for their recent friendly against Austria.

From my own experience of teaching at a primary level, I can see the positive impact football can have on girls. In the schools I have taught in, girls' clubs have been set up and I have run one which means the girls play alongside the boys - hopefully creating a more accepting atmosphere. There have been some initiatives run to integrate girls with football and the work of groups like @WomeninSport_UK or the writing of @SheKicksDotNet has at least brought the issue to wider attention. It cannot be argued that girls get less out of the sport than boys, or that their male counterparts enjoy it more than them. The future of women’s football in schools is certainly one to watch.