Women's Sport Between the Wars: Emancipation or Exclusion?

The history of women's sport is forever growing into one of the most intriguing topics to dissect and understand. Women's sport in general is continuing to grow and develop across the world - a far cry from the state of many games just 10-20 years ago. Here at The Football History Boys we have attempted to comprehend the effects of suffrage and wider female freedom in what is often perceived as a misogynistic social attitude before the Second World War. Indeed, we have looked deeply into women's sport before 1918, but not as thoroughly into the inter-war period which as we will see holds an equally pivotal position in history.

So in what state was female sport immediately after 1918? The short answer would be - not great. Following the rise in popularity of women's football during the First World War, the FA decided to ban women from being able to use their grounds and stadiums, leading to a rapid decline in attendances. A genuine fear had spread through the Football Association that their own game may be eclipsed by new stars like the Dick, Kerr Ladies.

The 1920s are often described as the heyday for spectatorism - the 1923 White Horse Final at Wembley exemplifying this. The female game was to suffer massively, missing out on a wealth of potential profits. Contemporary accounts recall betting scandals and financial irregularities as the reason for a ban. Biographer Tim Tate sees moral confusion in the era of flappers and new-found social freedoms as well as faux medical concerns as the integral factors involved in such draconian acts.

'The Council the Football Association yesterday passed a resolution expressing the opinion that the game of football quite unsuitable for women, and requesting the clubs belonging to the Association to refuse the use their grounds for women's matches."—Extract this morning. No one wishes to be mere spoil-sport, but is an excellent thing that the Football Association has considered the question of women playing football. This august body has decreed that women's football is undesirable. It a game "not fitted for females."'

Such views are a stark contrast from those just a few years previous as World War I ravaged much of Europe. Of course, even during the conflict, female emancipation on the football field was seen by some as unfeminine, but by others as a 'welcome surprise' and a 'useful lift'. Surely other women's sports would support their footballing counterparts? Not so. Wider recreational games undertaken by women had an middle-to-upper class feel to them - sports like golf and tennis brought with it a social entitlement and one which was not to be mixed with those less privileged. 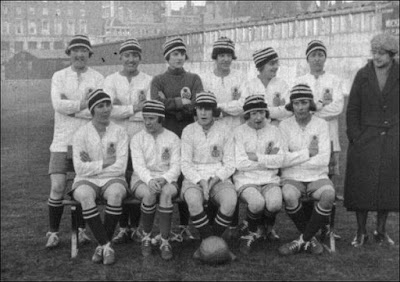 Despite the negativity towards football, the inter-war period was one in which certain sports began to flourish. The Sheffield Independent noted the improvement in facilities, concerning lawn tennis. Furthermore, the introduction of serious practice, club memberships and suitable fashion led to a more inclusive game for women. Indeed, a whole article could be written on the role of fashion in women's sport, but that is for another time. For the writer it is clear that women can become equally as efficient on the court as their male counterparts, "Indeed, it is an ideal sport for women, and the girl who takes it in earnest will find self growing happier, healthier and more physically fit every day."

Now, it is impossible to discuss inter-war lawn tennis without mentioning class. From as early as 1885 it was not rare to see females on court, even playing alongside men in the game of mixed doubles. Socialization was often as important to those playing as competitive action. In the enclosed gardens of stately homes and the ever-growing clubs in the South of the country, women could be hidden from the gaze of the common outsider. It is almost bittersweet as to the evident increase in female participation, that it could not be displayed to a wider audience and spectatorship.

On tennis in Plymouth, The Western Morning News noted,

"The standard of women's tennis Plymouth has improved considerably during the last five years. This is largely due the advance of school tennis generally."


It is widely documented that men's sport in the Nineteenth-century developed from the public school system due in part to a growing lack of moral and physical capabilities. However, by 1930, female education had also seriously adopted physical exercise as an important element to wider femininity. Again, this growth fails to recognise the working-class, but it did offer women a voice on all matters sporting. Hockey, rowing and golf all began to develop into major sports - ones in which men could be firmly put in their place by female grit and skill.

This was not to stop some people from openly venting their opinions on the matter,

"I have always maintained that the playing of strenuous games girls in their “teens" tends to make them hard and masculine, both physically and mentally. have found again and again that women who develop masculine characteristics, if they have children, have boys who arc generally weakly, and that it is the small, delicate, feminine woman who passes on the strength that she has held in trust for her boys, who are strong and manly."

What would be the response? French superstar Suzanne Lenglen had her say...,

"It's absurd ! Sport does a spoil a woman's femininity. Far from it. This declaration was made by Suzanne Lenglen in reply to the criticisms. " I do not agree. So far as my experience goes tennis is a most valuable aid to a perfect figure. I have never known any cases where it has caused thick ankles. Every woman whose health permits ought to play some game or other. A woman who doesn't is asking for trouble. "It is far better to play games and keep fit than risk doctor's bills. Even the risk of thick ankles is better than the risk ill-health. I have never known a woman jet whose femininity has been spoiled sport."


Hockey highlights a real development in feminine freedom before World War Two. Hockey is essentially a game very similar to football, if not more physical and violent. Both are 11-a-side, both use a similar size pitch and both have two goals. Introduced as a winter-game for males in the 1870s, women adopted the sport at the turn of the century. The same old questions were raised: what would they be wearing; how competitive would it be and who could watch? Indeed, sports historian Richard Holt notes that hockey developed into the only credible team-sport before 1939. By 1945, the sport was celebrating its golden jubilee...(next to America's largest fireman)! 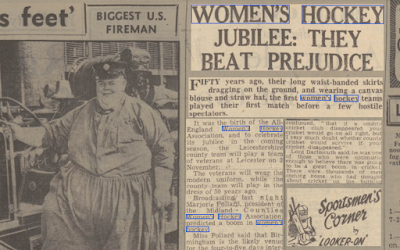 Participation was growing, directly in correlation with the expanse of the middle-class in Britain. On an international scale, female involvement in the Olympic games grew, despite severe restrictions and the draconian principles of the games' founder Baron de Coubertin. The Women's Athletic Association was founded in 1922 and in the US, swimming had developed into a popular leisure activity. Perhaps the greatest restriction for women, at least those of a working class background was spare time. The more time you had, the more sport you could play.

Unfortunately, football had been left behind in this broadening of female sport. Views contradictory to the evolution of the nation had meant old-fashioned values had led to a moral dilemma over including women in the country's 'national game'. The idea of being on show to thousands of spectators had worried those at the top, a predicament easily disguised in other leisure pursuits between the wars. Nevertheless, the interwar period can be seen as generally radical for women's sport in Britian - an increase in participation and a more specific scheme of work in schools meant it was beginning to become more accessible (Hargreaves, 2014).


So where was women's sport between the wars? The answer is quite ambiguous. Indeed, in the public schools and wider middle-classes were beginning to develop a more inclusive environment in which females could participate. Changes to fashion had made the games easier and able to develop into higher quality affairs. The exclusion of the working-class however does leave some flaws which would take to decades to address. Nevertheless, the growth of women's sport does reflect the wider expansion of the middle-classes in general. Britain was changing.

War would once more bring the nation together with the prospect of a more inclusive nation following its climax. The rise of the Labour party promised a closure of the gap between the workers and employers and with it more opportunities for women. 70 years on and we are beginning to see equal pay in some games and involvement in most Olympic sports. Figures like Nicola Adams, Serena Williams and the GB Women's hockey team have motivated and inspired the next generation of athletes - it's up to us to continue their incredible legacy.