Women's Football: The Evolution of the Welsh National Team 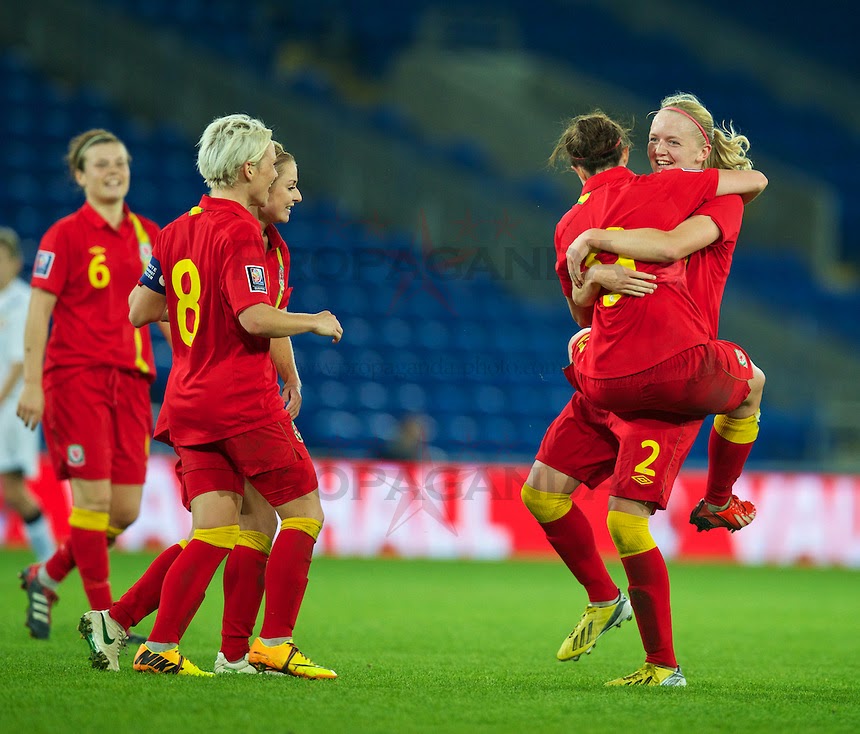 Throughout our 18 month existence we have written frequently about the history of football in Wales, be it the Cardiff City rebrand, the rise of Swansea or the legacy of the 1958 World Cup. However, to date we have not written about the female side of the Welsh game. Women's football has once again become the centre of attention with the kick-off of the WSL and the controversial emails of a certain Richard Scudamore. Despite minor setbacks the WSL has produced an abundance of new talent, like Manchester City's Toni Duggan, Liverpool's Lucy Bronze and Bristol Academy's Welsh international Angharad James. James for one has become integral to the rise of her national side over the last two seasons, a side which looks, for the first time, set to compete with the major players of world football.

Although officially founded in 1993, women's football in Wales has a much deeper history than many would think. The men's team were formed as early as 1876, becoming only the third international side in existence but there is a limited historiography in reference to a Welsh Women's side, with even the Wikipedia entry only accounting for results up to 2011-12. Even the modern day figures of Jess Fishlock and Michelle Green are infrequently discussed by even the present sports media. Despite this, football in Wales is a wider subject than many believe. To start is to find the true origins of female football in the country.

During the so called 'sporting revolution' of the late nineteenth-century in Britain, the development and evolution of sport was staggering. Rugby, tennis and football were just three to be produced by such a social phenomenon. Football was stereotypically seen as a 'man's game', too physical for the 'softer sex'. Indeed the St James Gazette eluded to this in 1885, where it is written, to the author's surprise that a 'stirring contest' took place between two female sides, in Scotland. Welsh women's football perhaps owes much to the formation of the British Ladies Football Team in the 1890s. Lady Florence Dixie wrote a powerful piece in The Pall Mall Gazette midway through the decade. Dixie asserts a genuine authority in to her writing, stating that, "There is no reason for why football should not be played by women, and played well too."[1]

So what about Wales? It is no secret that the sport of choice in Wales has been in general, rugby. Men's football has itself had to struggle to compete and so the evolution of the female game is arguably even more intriguing. The Rhyl Observer wrote of the possibility of women's teams in Wales to some ambivalence,


"Report goes that female football teams will shortly contest in public, and the problem is how, on the one hand, to make the performance graceful, and, on the other, not to spoil the game. Those who have witnessed the modern development of that noble sport will probably doubt whether even women will be able to harmonise such conflicting aims. Into this question we will not enter. Whether the real game played by women is a graceful or a disgraceful sight Mrs. Grundy must decide, and whether the game played in a ladylike manner is worth looking at, will doubtless, soon be settled."[2]

The Cardiff post had even described a women's match in London under the headline, "Amusing Football Match", from this we can see the evident misogyny women would have to overcome within Wales. Historian Martin Johnes has written that rugby and football have often attracted female support, but at times have deliberately excluded women for playing and even spectating. In 1918, the Cambrian Daily Leader wrote of the condemnation of women's football by the local church. In a time where the nation was at war, somehow an ignorant pocket of society still found a way to "strongly protest against the great degradation that has taken place."[3]
Although written a considerable time before the Welsh National Team was founded, the articles are clear in their portrayal of how women's football was seen in Wales. Historian Matthew Taylor in his book, The Association Game devotes much attention to the female game, highlighting a rise in popularity during the interwar years. He writes that the famous Dick, Kerr Ladies (of which we have also written) came to play at Swansea and Cardiff during their tour of Britain. They attracted crowds of 18,000 and 25,000 respectively. The popularity had once again grown, but to many people's distaste due to worries over womanhood and the indulging of 'masculine games'.[4] Over the next 70 years, Welsh football would see FA Cup victories and even a World Cup quarter-final to increase the coverage of the sport, and promote a growing sense of national identity. From this, an increasing acceptance of women's sport was equally achieved. [5] I wrote in July that from the 1980s, women's football has gone from strength to strength, not just in Britain, but globally.

England and Scotland have enjoyed a richer female footballing heritage than their Welsh counterparts. The pair played their first international match as early as 1972, and England have subsequently been shoe-ins (except the early 1990s) to qualify for the UEFA Championships from 1984. However, a Welsh team would play the Republic of Ireland in 1973 (a 3-2 defeat in Llanelli) before the same opponents and against England a year later - the score? A miserable 5-0 defeat. In fact prior to 1993, the national side had played 27 international matches, with a pitiful record of (W-D-L) 1-19-7. Most matches were played against other British Isles sides, including the first victory over Ireland in 1976 but the late 70s saw the Welsh compete against Italy (0-7), Belgium (0-3), France (0-6) and Sweden (0-4).

Due to such sporting profligacy the 1980s saw football fall into decline, playing just one match a year (usually against Scotland) and ceasing to play by 1989. Nevertheless four years later would see the official establishment of a national team and the evolution could begin. Once established Wales could start to compete with the major teams in world football. However, the word 'compete' is being kind to the side which recorded defeats to Switzerland, Iceland, Croatia and 12-0 humblings home and away international from powerhouses Germany in their first qualifying campaign.

Unsurprisingly there is little newspaper articles in connection to Welsh women's football during the infancy of the side. It was not until 2000 that a genuine shift in attitude is found. Indeed in 1998 FAW President John Hughes said that money provided by the English FA was to be put towards youth development and the women's side.[6] The People wrote in 2000 of 'teenage startlet' Sam Cooke and the development of a young Welsh side. Any hope of an immediate change of Welsh fortunes would have been naive to believe, but the growing emphasis on the female game meant there was an opportunity for future success.
Scanning through the previous results of the national team is by no means a joyful experience, the number of defeats vastly outnumber the victories. Arguably the turning point for Welsh football and women's football in general was the Euro 2005 tournament held in England. Despite not featuring at the finals, a greater importance was placed on the game, with television coverage and growing attendances making the English names of Rachel Yankey, Karen Carney and manager Hope Powell household names. Indeed the Welsh results steadily began to improve winning their World Cup Qualifying group, albeit in the 'second category' and not enough to qualify overall.

The present squad was the inspiration behind this article, recently whilst reading 'She Kicks' magazine I came across an interview with midfielder Angharad James who discussed international football and Wales' chances of qualification. I had heard little of the side's exploits so began looking a bit closer into them. The team, captained by Jess Fishlock came third in their UEFA 2013 qualification group and showed signs of emerging class and obvious talent. The 2012 Olympic GB team, managed by Hope Powell, saw no Welsh players and only two Scots in an English dominated side, which once again under-achieved. Despite the quarter-final exit to Canada, the games had provided even more coverage and praise for women's football.

So can this modern Welsh side compete? The answer is yes. Their last 14 matches has seen a dramatically improved record from that recorded between 1973 and 1989. In the past year W-D-L stands at 5-7-2, including a 5-1 thumping of Turkey - Jess Fishlock scoring a hat-trick. Wales are sitting in second position in their group, which feature the likes of England and the domestically troubled Ukraine. The Welsh only suffered a 2-0 defeat to the English and caused Mark Sampson's a difficult 90 minutes at The Den. Whilst the 2014 World Cup in Brazil is taking place in June, the women's side will be facing Turkey and Belarus in two games which could shape the future of Welsh football and Welsh national identity. Could they become the first Welsh side (Men and Women's) to qualify for a major tournament since 1958? I hope so!